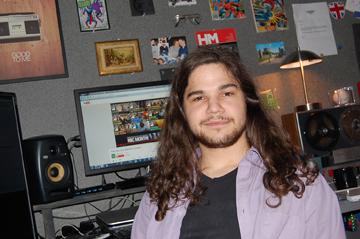 At Empathos:  Mixes left- and right-brain functions of IT support with sound design and composition for a thoroughly blended  effort

Career:  3 years in IT infrastructure support at a Fortune 500 corporation; 8 years in audio and sound

Learned the hard way:  Most of the technical issues with computers are found between the chair and the screen

Jared’s resonant “radio voice” snagged him a stint as stand-in voiceover talent for a video production effort on the new Empathos online training in the CAMS Framework. One-take Jared nailed this audio assignment on the fly and on time.

Helping new and up-and-coming artists compose and record music is Jared’s passion when he’s not working on Empathos projects. Serving others is something that is second nature for Jared. He was raised to recognize and to honor the greater good, and this makes his role at Empathos a perfect fit. If you get a help email from Empathos Support, it’s likely Jared’s the one behind the screen.

Jared’s insight, patience and talent bring much to Empathos, and the feelings are mutual. Jared says it’s “a great thing” to be part of the Empathos mission of empowering suicide prevention through education. And we say it’s a good thing that Jared is a member of the Empathos team, because no one is better suited to conquer a computer conundrum that he is.