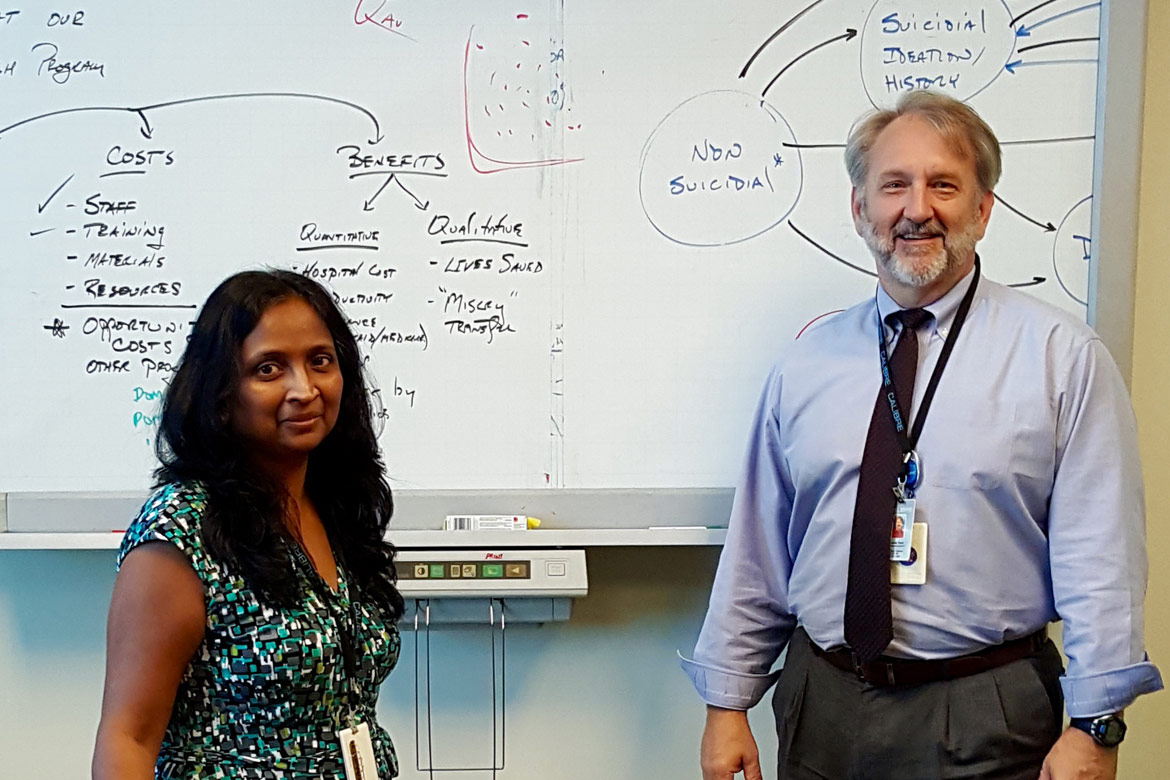 Health care decision makers have limited resources, so when presented with competing provider needs, they often use some form of economic evaluation—whether formal or informal—to choose how to best allocate available resources.

Enter Calibre Systems, a respected management consulting firm based in Alexandria, Virginia. Calibre conducts cost benefit analyses, or CBAs, for clients in health care and beyond. CBA gives decision makers a set of options or alternatives (such as training, tools and methodologies) that provide health care systems with the most benefit for the least cost—a critical component in suicide prevention.

“In the field of suicide prevention, there have been discussions on and requests for CBAs,” says Ramya Sundararaman, MD, MPH, PMP. Dr. Sundararaman is deputy director of Health Policy Research & Analytics at Calibre Systems. “Even this year, the Zero Suicide Collaborative had tremendous activity associated with a need for more economic analysis,”

The field is not without challenges when it comes to analyzing the economics of suicide prevention, Dr. Sundararaman notes, not the least of which is calculating the cost of each life saved. This is difficult at best, given the myriad considerations including perspective, assumptions and social sensibility.

“However, through a well-defined scope, agreed-upon terms, and reasonable assumptions, we can estimate the costs and benefits—and hence, perform a CBA,” Dr. Sundararaman adds. “At the very least, two options concerning suicide prevention are ‘no action or change in current processes’ or maintaining the status quo, as opposed to a ‘zero suicide’ approach.

Dr. Sundararaman and Calibre Systems colleagues Chuck Lunati, PMP, vice president  and senior economist, along with Jim Frank, MS, principal analyst, are presenting a workshop on CBA and suicide prevention at the 49th Annual Conference of the American Association of Suicidology in Chicago on March 29, 2016. The conference runs March 28-April 2, 2016.

For the past decade, the Department of Defense (DoD) and the Department of Veterans Affairs (VA) have reacted to multiple issues as an outcome of the conflicts in Iraq and Afghanistan. High on the list of issues are: an increase of Veterans with post-traumatic stress disorder (PTSD) and traumatic brain injury (TBI); a surge of Wounded Warrior and disabled Veteran populations; a rise in sexual assaults and suicide rates. In every instance, after significant public events, DoD and VA have reacted by deploying and/or developing multiple initiatives and programs without the benefit of an integrated strategy or policy, established metrics for evaluation of program effectiveness, or performance-based oversight of scarce resources ... See white paper below to learn more.